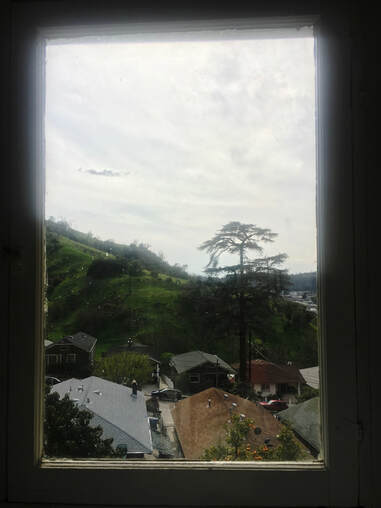 Conceived specifically for the inaugural "Weekend at Berenice", a weekend of dance, performance, and objects in a hillside home in Montecito Heights, Los Angeles, CA.

The performance begins in darkness. The garage door closes behind the last of the 20 audience members allowed in. The projector slowly turns on, showing a straight line along the back wall. Reading from a printed script, the narrator starts by enunciating different definitions of lines, points and vectors in geometry. As the slides change to illustrate their words, the narrator breaks down the regularity of the geometric forms by refracting the lines with a full length mirror, making some join and others move along with the bodies of the viewers.
The speech on geometric lines soon becomes about socio-political lines, such as borders and frontiers. In the narrator’s words: “To pass through this limited horizon line, we must turn it into a vector by using force and velocity.”  At this juncture, they unveil the window on the back wall, which was covered by a black curtain. The late afternoon sunlight gushes into the garage. A video on a second projector starts playing, showing a moving vehicle on a bridge. The narrator picks up Jean Baudrillard’s America and reads a passage from it, advocating for speed as a means to elucidate time. But it is also with speed that violence of conquests has driven populations into migration. The narrator transitions to a video of themselves making an X shape with reflective tape, among the ruins of Wupatki, near Flagstaff, Arizona. They use their body to mark the site of an ancient Pueblo settlement, deserted for reasons unknown. The narrator then steps back in time to talk about the first time they performed the X becoming a Y, among the ruins of a cemetery in Athens. By inserting their transgendered body in the landscape, they beg the question whether the changing body of a transgendered person can disrupt lines and temporality.
The breaking of the horizon line becomes emblematic for the belief in change and future. Rhythmed by the discarding of pages of the script, the narrator moves in space and changes the configuration of the objects placed there. They pick up the projector and place it on a cardboard box, pointed at a 1980s globe. The slide, showing the horizontal pupil of a goat, wraps around the sphere. Another example of horizons, is the experience of soldiers stationed at seaside bunkers during WWII. The slide returns to the line. The narrator picks up the projector once more and faces it towards the back wall. A section of the line disappears through the window. They walk towards the window and open it. “For their pleasure and entertainment, the officers began ordering ship explosions in the middle of the ocean / The spectacle of the explosions reassured the soldiers that the monotony of their existence could come to an end.” Five figures appear on the horizon of the opposing hill. They walk in a line, wearing Mylar reflective of the setting sun. “For one brief moment, they perceived through the sculptural forms of the explosions, a vision of the future / Even the horizontality of the ocean can be broken.”  The narrator steps away from the window and uses a small square mirror to reflect on the dichroic plexiglass, making a green reflection across the room.
They end the performance with the example of Standing Rock and the lines formed by the protestors and the police. “The protestors believe that the love in their chests will eventually break the system of hatred, perpetrated against them / Once the line of power is broken, differently from a protest line being broken by the police, the agents of power will come forth, as vulnerable as newborn babies, ready to accept love.”
“Love breaks, that is undeniable.”
Perhaps such a primordial force exists to safeguard us against the continued violence of conquests and erection of borders. Despite being driven across the linearity of time and space, one must believe that it is a natural course that orders will always be changing, and the current order will subside for a new one. “[...] every rock is constantly changing, and has been so, by the same force that propelled upon it, millions of years before the [quote] "discovery" of America.”